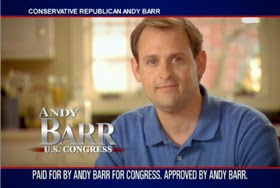 Okay, so welcome to Lady C's first Ten Buck Friday. Until the election, I'll be highlighting a candidate across the U.S. that I feel needs a little "Ten Buck Friday" moneybomb. Not sure where the idea originated but I read about it over at Left Coast Rebel. I know Conscientiously Conservative, Right Klik is on board, and Mind Numbed Robot. I think it's a brilliant idea and will be continuing the effort past election time to include center-right think tanks and PACs.
My first Ten Buck Friday goes to Congressional candidate Andy Barr in Kentucky's 6th district.The sitting Democrat in that seat is Ben Chandler. Ben is one of those Democrats who canceled his town hall meetings so he wouldn't have to face his red state voters during the Obamacare debate and has promised to vote yes on cap and trade. He did vote against Obamacare, but only after getting a pass from Mrs. Pelosi. I've heard he felt threatened by the array of qualified Republican candidates lining up against him, specifically Andy Barr. This is a seat that Andy can win, taking one more Congressional seat away from Frau Pelosi and Co.
Garland “Andy” Barr, 36, is an attorney with the law firm of Kinkead & Stilz, PLLC. He is also a part time instructor at the University of Kentucky where he teaches Constitutional Law. Yes, I said CONSTITUTIONAL LAW and he's extremely articulate when debating constitutional issues.
I've heard that in recent polling Andy is 7 points behind Chandler so he's going to need money to push him over the finish-line in November. No matter where you live, please consider donating this Friday's Ten Bucks to Andy Barr for Kentucky's 6th Congressional district.
Posted by Lady Cincinnatus at 4:39 AM

Thanks for posting this!

I'll put Barr on the list of nominations for this coming week.


P.S. Everyone who participates in this should put "Ten Buck Fridays" somewhere in the online donation form so that recipients know what's happening!


P.P.S. let me know if you want to post the next poll on your blog, I can send you the script.

Yes, go ahead and send the poll... ladycincinnatus@gmail.com

Hello Lady Cincinnatus! I see you are a fellow TBF blogger. You have a new follower here. Please feel free to check us out anytime and follow if you like!