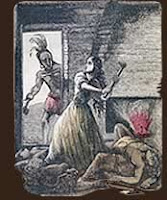 I'm off for a weekend of history. Yes, I'm a crazy history nut, so I'll be spending my weekend, "gaining a basic knowledge of horsemanship in the 18th century", studying "native plants and trees settlers found and used in early Kentucky", learning the basics of "campfire cooking, including choosing the right wood, and starting and tending a cookfire" and my favorite, getting a "working knowledge of 18th century firearms and firearm safety by shooting the long rifle." Sweet!
**UPDATE**
You will be glad to know that I survived the long rifle practice unscathed and was able to bounce my tomahawk off the block. While I certainly would not have succeeded in killing any attacking horde of savages out on the frontier, I would have at least knocked one senseless. Hey, it's progress. I was also able to duck several dive bombing raids by native locusts. ewck.
Posted by Lady Cincinnatus at 5:46 AM

Going to go all rustic on us, eh? Enjoy yourself! Tell us all about it when you get back!