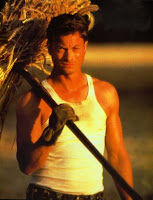 A group of politically conservative and centrist Hollywood figures organized by actor Gary Sinise and others has been meeting quietly in restaurants and private homes, forming a loose-knit network of entertainers who share common beliefs like supporting U.S. troops and traditional American values. of those involved are taking more public steps to counter the entertainment industry's tilt toward liberalism and Democratic politics, such as campaigning for Republican Sen. John McCain or crafting projects to portray America in a more positive light.The group, whose members call themselves "Friends of Abe" after Abraham Lincoln, was organized as an underground movement because of fears that prominent industry titans with outspoken liberal views would retaliate, said participants. They often were reluctant to name members of the group in interviews for fear it would hurt their careers.

Oh yeah and Gary Sinise falls within another category of mine, Celebrating the Heterosexual White Male.
Posted by Lady Cincinnatus at 11:44 AM

'Oh yeah and Gary Sinise falls within another category of mine, Celebrating the Heterosexual White Male."