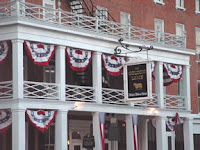 From WizBang. And just a little backgound on the campaign stop. In 1940 it was marked by the Daughters of the American Revolution as the oldest hotel in Ohio. 12 presidents have visited The Golden Lamb. J. Garfield W. McKinley J.Q. Adams B. Harrison W.G. Harding W.H. Taft W.H. Harrison U.S.Grant M. VanBuren R.B. Hayes R. Reagan G.W. Bush. I know it's not a greek column but I think it's a pretty good choice. They have a great coconut custard pie too!

Heh. MSNBC just cut away from Barack Obama speaking about how John McCain has never done anything on education to go to a McCain-Palin rally in Ohio where they were reporting "Obama-size crowds." The crowds there are energetic, too. It is not an exaggeration to say the crowd is going wild.

Posted by Lady Cincinnatus at 8:30 AM

The Man in the Fedora said...

It's killing me not being there! I've always wanted to go to the Golden Lamb and to be there when Sarah is there would be such a treat.