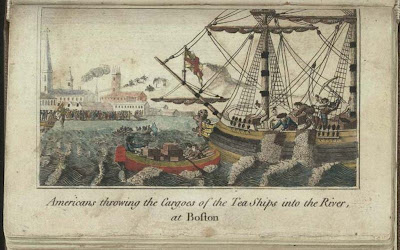 We've all heard the audio by now and I guess if you haven't you should google it yourself. In it you hear the great and wonderful Obamessiah talking about “constraints that were placed by the founding fathers in the Constitution” "preventing" redistributive change. It sounds like Obama missed his jr. high government class where we learn how the Revolution was fought and the Constitution was written to create constraints against government power and tyranny and "redistributive change". In fact, I think that whole thing called the Revolution touched on "redistributive change". England wanted to force those damn yankee colonials to redistribute some of their wealth back to the mother country and those colonials with muskets weren't keen on the idea of their wealth being redistributed to England. Seems to me that I recall England forcing the issue via an increase in taxes, one specifically targeting "tea" drinkers.
Posted by Lady Cincinnatus at 6:19 AM

"Seems to me that I recall England forcing the issue via an increase in taxes, one specifically targeting "tea" drinkers. "

Instead today, we have a fawning media made up largely of Obama Kool-Aid® drinkers! Heh.