The Sarahcuda Drops By Ohio WalMart And Doesn't Buy Arugula 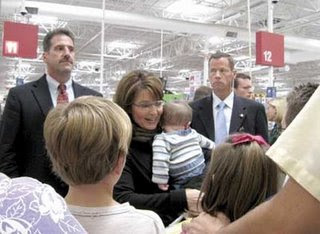 From Gateway Pundit. Yeah, no wonder the Leftist Elites hate Sarah Palin. She dares to set foot in Wal-Mart. Next it will be a Dollar General and watch their heads explode. I just wish she was purchasing her newest moose shot gun instead of diapers. That would have REALLY made the MSM go insane.

Holding her youngest son Trig and flanked by security personnel, Republican vice presidential candidate Sarah Palin greeted shoppers at the Gallipolis Wal-Mart on Sunday. Palin was enroute to events in Marietta and St. Clairsville when she made her stop in Gallipolis. (Kevin Kelly/photo)The shoppers said- "She's really down to earth. There was no ego and she treated us with respect."Oh... And, she didn't promote socialism, either. That was a plus.

Posted by Lady Cincinnatus at 8:39 AM

that is a great statement about the elite, my ex daughter-in-law won't step foot in a walmart and guess who she is voting for the socialist liberal