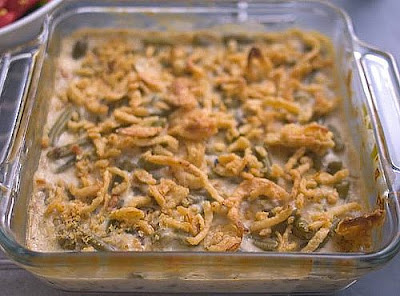 In honor of the holiday, I just thought it would be fun to pretend I was a leftist, Communist, Marxist, Democrat for the day, so have invented a new name for the holiday to reflect such. The evil that is known today by the American masses as Green Bean Casserole was invented by the equally evil Campbell's soup company in the 1950's by a woman with the horribly American name of Dorcas Reilly. Dorcas came up with the recipe to promote Campbell's products, something clearly only a capitalist pig would do. The casserole's only redeeming quality is the french fried onion topping. This doesn't even begin to touch on the annual ritual of "executing" the turkey bird.
Posted by Lady Cincinnatus at 12:50 PM