Joe The Plumber Stands With Israel 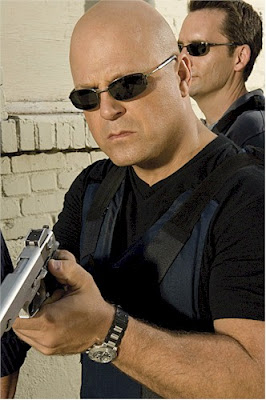 Michelle Malkin makes some great points about Liberal Elite Journalists and their war against anything that doesn't drink their Kool-Aid. I specifically liked the line about joe having Main-Stream-Propaganda-Media coughing up hairballs. Heh.

Who’s afraid of Joe the Journalist?
by Michelle MalkinCreators
SyndicateCopyright 2008
If a community organizer can be president and a Saturday Night Live comedian can be a U.S. senator, why can’t a plumber be a reporter? Joe Wurzelbacher, a.k.a. Joe The Plumber, is headed to Israel to interview ordinary citizens about life in the crosshairs of jihad. He’ll be filing dispatches for conservative Internet video broadcasting site, PJTV.com (to which I also contribute). Predictably, the very idea of a non-credentialed public figure attempting to “do journalism” has catty elite journalists hacking up hairballs.
CNN television anchor Kyra Phillips sneered (in her most objective and professional manner, of course): “Oh, Lord, Joe The Plumber’s got a new gig. It’s got nothing to do with the pipes, it’s got everything to do with Gaza.” After catching her breath during a commercial break, she embellished her teleprompter lines with ad-libbed contempt (something only seasoned professional journalists have experience doing, you see): “Now Joe The Plumber wants to flush out the truth as a war correspondent. I know, there are just no words.”
Still not done trashing the Toledo, Ohio citizen who had the temerity to question Barack Obama’s redistributionist policies, Phillips piled on with more derisive words: “Hey, Joe, what do you know? No, seriously, what do you know?…[H]e says he hopes to air Israelis’ views on the Gaza offensive. Lord, help us. Just want to remind you that Joe the Plumber has no journalism experience. No war zone experience either. But he thinks he’s, quote, ‘pretty well protected by God.’ So, what’s Joe been smoking, drinking?”
What’s he smoking and drinking? Clearly not the same ideological Kool-Aid and liberal fumes that you and your snob colleagues imbibe and inhale, Ms. Phillips. The CNN anchor has some nerve questioning Joe The Plumber’s journalistic credibility when her own cable news network once hired former NYPD Blue actress with zero journalism experience Andrea Thompson to sit in an anchor chair like the one Ms. Phillips occupies. As to the media hounds now braying at the idea of hiring celebrities for the sake of publicity, which network was it that hired foul-mouthed
entertainer with no anchoring experience Kathy Griffin to co-anchor its New Year’s Eve coverage? Oh, yeah: CNN. Griffin teamed up with CNN star Anderson
Cooper, whose resume includes stints as a child model, fill-in host for Live with Regis and Kelly, and reality show, “The Mole.” Who’s afraid of Joe the Journalist? Unlike Ms. Phillips, I do not begrudge anyone an unconventional path to journalism. On the Internet, conservative bloggers with full-time day jobs have done incredible investigative work without a journalism school credit to their names. (See here.)
So have independent war correspondents like Michael Totten (blogger) and Michael Yon (Special Forces veteran).
Groupthink, credential fetishism, and the Sorbonne mentality have turned national newsrooms into stale echo chambers. For all its self-aggrandizing paeans to “diversity,” mainstream American journalism remains one of the most intellectually and ideologically monochrome sectors of the public square. Territorial liberal journalism gurus have attempted to de-legitimize unorthodox practitioners of their trade by redefining “journalism” based on content. If a conservative writer breaks news harmful to their presidential pick or contrary to their world view, it’s a “hit piece,” not investigative reporting. If a conservative website interviews newsmakers or provides original legislative analysis, it’s “propaganda,” not explanatory or
expository journalism. Thus, the myth that conservatives don’t “do journalism” persists. By their definition, we never can.
Joe The Plumber’s new gig is an affront to the Fraternal Order of The Professional Journalist because it underscores hard truths: An Ivy League
Journalism degree does not a truth-teller make. International war broadcasting
experience does not a truth-seeker make. Look at Pulitzer Prize-winning Washington Post fabulist Janet Cooke. Or New York Times fiction writer Jayson Blair. Or Boston Globe fabricators Patricia Smith and Mike Barnicle. Or former CBS News Captain Queeg Dan Rather.
Or closer to the action in Gaza, witness the veteran editors of Reuters photographer Adnan Hajj, who succeeded in peddling Photoshopped images of fake smoke billows
and flares over Beirut in 2006 before bloggers blew the whistle. Or consider
the Hamas sympathizers at France 2. The international TV network was forced to apologize this week for its false story on Israel’s military operations. Independent
French bloggers showed that France 2 used an old 2005 amateur video of
Palestinian casualties from an accidental Hamas truck explosion and passed it
off as current footage demonstrating the violence in Gaza. France 2 was the same
professional media outlet that aired a bogus September 2000 report blaming the
Israeli army for the shooting death of a Palestinian boy, Mohammed al-Dura.
Joe The Plumber-Turned-Reporter can’t do anymore to harm journalistic credibility than the “credible journalists” have already done.

Posted by Lady Cincinnatus at 6:20 AM