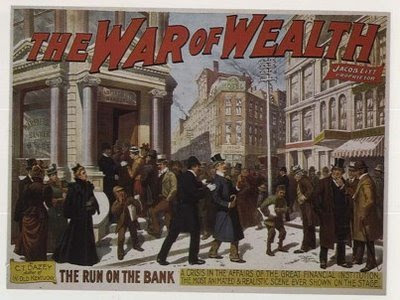 I first heard this on Quinn and Rose this morning out of 96.1 in Lexington, Kentucky, but I'm also seeing it on Pat Dollard's site and Rush mentioned it and also Atlas Shrugs. In mid-September, some one or entitiy began emptying America's banks right before the election. According to Pat's site,

"On Thursday Sept 15, 2008 at roughly 11 AM The Federal Reserve noticed a
tremendous draw down of money market accounts in the USA to the tune of $550
Billion dollars in a matter of an hour or two. Money was being removed electronically."

What's funny is that one caller on the Quinn and Rose show said that she noticed a withdraw of $100,000 in September from their money market account and the name listed on the withdraw was the U.S. Federal Reserve Bank. Hmmm. So, they ie. The Federal Reserve "noticed" money coming out, but it's THEIR NAME ON THE WITHDRAW!! Here's some more,

So where's that money? Who took it out? Where is it now? Another interesting point. I find it interesting the the pin that pricked this postulous sore was a letter written by Senator Chuck Schumer, a Democrate from New York in June of 2008.

"The U.S. Senator who leads the Senate subcommittee that oversees the Federal Reserve and economic policy has written letters to federal bank regulators questioning the condition of IndyMac Bancorp Inc. of Pasadena, news services
reported Friday. Sen. Charles Schumer, a Democrat from New York, sent the
letters to the Federal Deposit Insurance Corp., the Office of Thrift Supervision, the Federal Housing Finance Board and the Federal Home Loan Bank of San Francisco. The letters reportedly said Schumer is concerned IndyMac "may have serious problems with its current loan holdings, and could face a failure if prescriptive measures are not taken quickly." Schumer, who serves on the Senate Committee on Banking, Housing and Urban Affairs and is chairman of its Economic Policy Subcommittee, cited concerns that the bank's condition is a risk to taxpayers and borrowers. Moody's Investors Service Inc. on Tuesday downgraded IndyMac.
Calls to IndyMac's media relations department were routed to an automated message saying the bank (NYSE: IMB) is in its second-quarter quiet period, which started June 25, and will not make comments about its performance until its quarterly earnings announcement. No scheduled date for that announcement was immediately available. The $32 billion bank was a major alt-A lender, making loans to people who are just below the level of prime borrowers but with credit better than those who could only land subprime loans."

"The public disclosure of the letter from Chuck Schumer, who serves on both the Senate Finance Committee and the Senate Banking, Housing, and Urban Affairs Committee, resulted in an eleven day run on Indymac that resulted in the withdraw of more than $1.3 billion dollars.John Reich, the director of the Office of Thrift Supervision, blamed the Indymac bank failure on the comments made in Senator Chuck Schumer's letter. "

Posted by Lady Cincinnatus at 6:03 AM