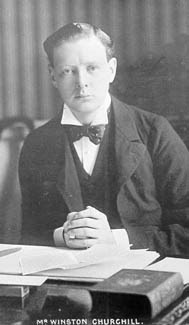 First it was the bust of Winston Churchill and now B. Hussein has "re-gifted" some DVD's to the Prime Minister of Great Britain, the United State's greatest ally and defender of liberty in the free world (for now). DVD's that probably don't even work on the DVD players they have "across the pond". This wouldn't be so bad coming from such a hip, cool, coolster, like Obama. Too bad P.M. Gordon Brown went to such lengths to treat this White House with respect. Talk has been that Mr. B. Hussein President is being amateurish. I don't agree. I think he's doing exactly what his handlers and his tellaprompter are telling him. To defeat America, one must infiltrate from the inside and then I'm sure it would be helpful to get rid of her allies. The first matter has already been taken care of so now we're on to number two. Sir Winston is probably rolling in his grave.
Posted by Lady Cincinnatus at 5:54 AM