Nanny State Kills the Mini Dirt-Bike Industry. Up Next for Extinction--Books 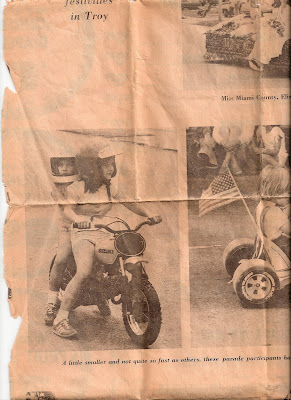 Yes, that's yours truly on the back of that mini-bike circa 1974. Heh.

"It became illegal Tuesday to sell off-road machines geared for children younger than 12 because parts in them contain lead at levels greater than 600 parts per million. Most motor vehicles have such parts. "I think they took this law a little too far," said Margie Hicklin-Krsul, the owner of Redline Sports, a sports bike dealership in Butte. "I've never had anyone come in and say, 'My child keeps putting parts of his motorcycle into his mouth.' Dealerships — where sales already were sputtering because of the recession — received notices over the last month that they must pull the bikes off showroom floors. Industry leaders say some 13,000 dealers are now stuck with $100 million worth of inventory that may end up worthless. Congress tightened lead limits on children's products last summer after a series of discoveries of dangerous lead levels in toys, and the rules took partial effect last week when a judge nixed a 12-month reprieve while the Consumer Products Safety Commission finalizes them. The law won't be enforced for a year, but retailers can no longer sell
products that contain materials in question. And they may find once the rules are clarified that the inventory now filling their storage rooms is worthless."~Oregon's Mail Tribune

Posted by Lady Cincinnatus at 1:07 PM

It became illegal Tuesday to sell off-road machines geared for children younger than 12 because parts in them contain lead at levels greater than 600 parts per million.

I'm reminded of that great line from Butch Cassidy and the Sundance Kid, where they are about to jump off a cliff into a river, but, Sundance doesn't want to jump:

Butch: What's the matter with you?
Sundance: I can't swim.
Butch: Are you crazy? The fall will probably kill you.

Worrying about the amount of lead in dirt bikes is probably about the same!

And let the record show that I never did try to eat or even lick my dirt-bike.

Would you like a Link Exchange with our new blog COMMON CENTS where we blog about the issues of the day???