Let's Bring Back The Duel!! 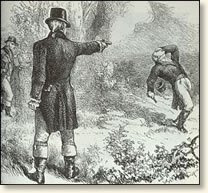 Summer Patriot, Winter Soldier has come up with a brilliant idea that I've quoted below. Can we petition to bring the duel back into vogue? Heh.

bring back the duel to the death ...

friends:
i make a modest proposal to bring civility and comportment back into politics.
i suggest that we bring back the duel to the death.

it was a cherished institution right up until the civil war, and did much to assure that those who openly engaged in public rancor with their political adversaries at least did so in all seriousness. you may be sure that when aaron burr killed alexander hamilton, he did not do so in light jest.

just imagine if you will, a world without the braying jackasses lanny davis, james carville, susan estridge, barney frank, al franken, and a host of other loud mouthed insufferable braggarts and professional sycophants. imagine a world with reverend wright, or jesse jackson, ... , or any number of others who are of spiteful, contemptuous and rancorous dispositions. i assume that all such people as named above would button up their yaps were dueling back in vogue, as i am assuming that not one of them would be of sufficient mettle to actually have at it with an equally
armed opponent at arms length. nothing quite like the prospect of death to invoke a little caution in one's expression, a little civility in one's demeanor.

as to weapons, if guns were favored by the combatants, i would think that the .45 long colt in a brace of model 1873 colts at 15 paces would be sufficiently lethal to insure the death of one or more of the participants. if people wanted to work hard enough at it to ensure a proper aesthetic, in keeping with the proper solemnity of the moment, say a duel as between franken and frank, then nothing beats the classic foil. and, always, as in all things human, one or a society should not entirely loose it sense of humor about such things, we should always be mindful of abraham lincoln's choice of weapons when challenged to a duel by a fellow illinois militia officer, during some very obscure militia versus indians campaign. lincoln chose rapiers, and the fight to occur on a plank slung between hogsheads, e.g., that's a big ass wooden barrel, to you.
the would be duelist thought the better of it in lincoln's case, and was consigned to a deservedly obscure place in history.an occasional genius like hamilton was felled, but
far more hot tempered big mouths like lincoln's adversary were sufficiently
chastened by the chill air of morning to perhaps reconsider whether the matter
at hand actually merited dying. i can think of nothing more desirable than
shutting up the caravilles and estridges of the world, and believe the duel to
the death a fitting mechanism by which to do so. what could be the downside to a fight between barney frank, and any other person on earth?(you'll notice an implicit trust in my analysis in g_d making the proper decision, in all cases.)
john jay @ 07.06.2009

Posted by Lady Cincinnatus at 6:08 AM