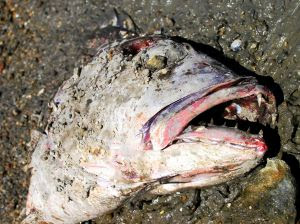 As I'm sure you already know, the White House is under fire for a blog post asking supporters to send "fishy" information received through rumors, chain e-mails and casual conversations to a White House e-mail address, flag@whitehouse.gov. I would just like to ask a question...
Can we get Rahm Emanuel to conduct a press conference to explain what exactly the meaning of "fishy" is? Since he has some experience in dead fish and sending them to wayward pollsters like Alan Secrest; I think he's the best to outline how the White House defines "fishy". If "fishy" is what warrants a friend or neighbor "informing" on another friend or neighbor to the most powerful institution in the world, the White House, then surely we deserve a little clarification on what exactly is meant by the term "fishy". I realize that Rahm has said he didn't know that the Mob was known for sending dead fish to their targets as a death threat, but the use of the same word seems to me, I don't know, a little fishy.
Posted by Lady Cincinnatus at 6:05 AM