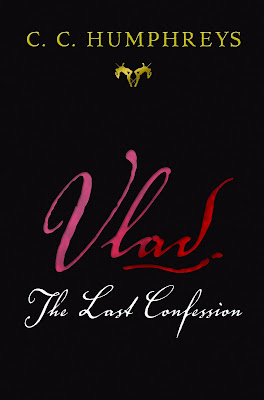 I've always been a fan of historical fiction as there's no better way to get your head into history. It is most often written in the gap between true events and myth, propaganda and truth. Nowhere is this more evident than in C.C. Humphrey's Vlad: The Last Confession. If you are afraid I'm going to tell you how I'm a big fan of the recent vampire craze, you'd be seriously wrong. This tells the true story of Vlad the Impaler, Prince of Transylvania. What is frightening about the book is, like most history, it runs right into the present. And C.C. Humphrey's is one of the best writers of historical fiction along with writer's like Bernard Cornwell. So, I give you a taste...

'No,' said Vlad, serious again. 'We fight because, however much we may hate each other, we have to hate them more. They are the enemy. Of our faith in Christ, however we see it, Orthodox or Catholic. And for our lands. Free, not under the yoke of Islam and the Turk.'

and there's this one.

'It is because a restored Order of the Dragon could once again become Christ's cutting edge, uniting leaders in every state in the Balkans, and in lands beyond, under our banner. And thereby - need I remind you of this? - helping to lift the scimitar that presses on Rome's throat.'

Something to keep in mind while reading the book. By November of 1204, Christian knights were facing a long, protracted war in the middle-east for control of the holy land. A mission that was suppose to take them to Egypt to attack the Muslim stronghold there, instead had them laying siege to Constantinople to win over the seat of power for a greedy nobleman. The mission was a disaster and it weakened the largest city of eastern orthodox Christians, it broke christian Rome from the Eastern Orthodox Church and it heralded the death knell for christian knights in general. By 1291, the Muslims eject the last of the crusaders from the holy land and in 1307, the entire order of knights Templar are arrested, killed, tortured and imprisoned. By 1453 the Muslims are able to conquer Constantinople.
Posted by Lady Cincinnatus at 5:36 AM