A Little Labor Day Story Called "We Are Americans!" 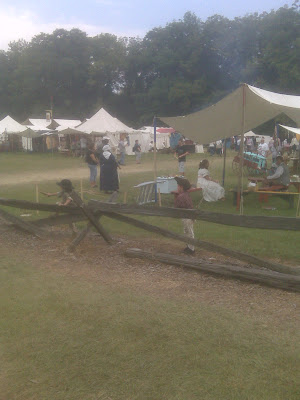 For those of you who read this blog and know me, you will know that I am an avid lover of history. So, it will come as no surprise that every Labor Day I attend a little festival that celebrates a battle in which an American colonial General and his merry band of militiamen, fight and defeat a British-backed band of Indians thus further securing more land west of the Appalachians for those damned Yankees.
During this year's "re-enactment" there was a group of about ten little guys all dressed in their colonial finest in ages from about six to eleven. You can see two of them in the picture above--one storming the fence and the other standing at attention. They were having fun storming up and down a particular hill and conducting various raids on unsuspecting tents and parents and dividing up and charging each other--they being heavily armed with wooden swords, wooden rifles and wooden pistols.
I've never seen truer patriots which was a breath of fresh air from the ObamaNation creepiness speech to America's school children today. But I digress, so, these little guys, upon winning some battle against each other, marched off announcing "We are Americans! We are Americans!" while those playing the British writhed around in the grass in mock injury before hopping up again and joining in the battle line, "We are Americans! We are Americans!" When they ventured close to the tent I was manning for the day, I asked the one with the long, dark hair and the tricorn if he was out hunting Indians. Rather smartly, he informed me that, "No, we are hunting macaronis'." Hah. For those of you who are not familiar with the 18th century term macaroni...well, I'm sorry, I'm not going to explain it to you, you'll just have to look it up.
What is so perfect about this display of politically incorrect play was seeing these little guys up to their noggins in mud and dirt (Swine flu? What swine flu? The swine is in the barn), armed to the teeth with wooden implements of war, and running about the "field" completely free to pretend to be little colonial militiamen. In other words, FReeeeeeedoooom!! Something I'm sure you won't see in Obama's classrooms. In fact, the father of one of the little guys, I'll call him "Ben", informed me that unfortunately, recruiting little bands of 18th century colonial militiamen at historical reenactments is something his son also likes to do during recess for his kindergarten class. "Ben" told me he was called to the school to meet with teacher and Principal to be informed that "despite the fact that you're a history professor and you like doing historical reenactments, your son can not turn the entire male population of his kindergarten class into various colonial brigades." Heh. How much you wanna bet Obama's speech is not going to make any lasting impressions on this little guy.
Posted by Lady Cincinnatus at 6:36 AM

Huzzah! for Colonial incorrectness. I especially liked the part about turing 'the entire male population of his kindergarten class into various colonial brigades.' I think we NEED a few Colonial brigades....