Some Thoughts On Monsters or "Happy The Bunny Goes Recycling" 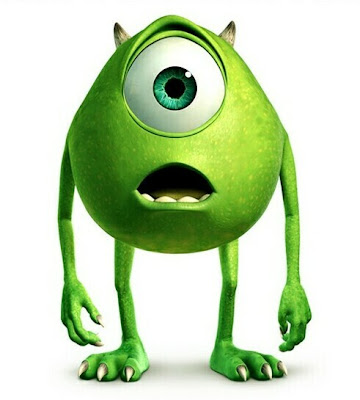 Sometimes good things do come down from Canada. Like the following from Free Canukistan:

"I consider the de-monsterization of monsters to be a disservice to the truth of things, and the moral and imaginative education of children. You know, editing all the scary bits out of stories and nursery rhymes, and replacing it with “Happy The Bunny Goes Recycling.”

Cookie Monster? Messy eater. Grover? Groveller. Harry? A bit irritable. Sweetums? Pretty scary in the Henson version of The Frog Prince, but since that, just a misunderstood guy with some facial-hair issues. You know, ‘cuz monsters are funny and nice and stuff. Ho-hum. Everything is nice… except when it isn’t. Where are the real monsters, human or otherwise? When adults refuse to deal with scary stuff in age-appropriate ways for fear of ‘traumatizing’ their kids, they send the message that this is so horrible, even adults are scared and powerless to handle it. Better to re-write all the stories, only with nice characters and happy endings. Except– not everybody is nice, nor are all endings– or middlings and beginnings– necessarily happy. The world– while shot through with wonder and glory– is also full of sorrow, darkness, and evil. And even monsters.

Some of them have names, and torment people or nations; some have died, but their works and effects live on; some are in our midst, and we want to imagine they are nice, even when that’s not true. The human scale runs from very good to very bad, and so character and choices matter, and we do have a say in who we are and what we become. Castro? Small monster. American/ EUro totalists? Mini-monsters. Mass-murderers? Monsters. The Left-wing twins of Communism/Fascism? Monster-think. Bureaucratic mismanagement of health-care resulting in death, untold suffering and difficulty for the sick and their loved ones? Monstrous. Islamo-fascism? A veritable hotbed of monsterism.

To refuse to recognize monsters is not to improve the world, but to partially blind
ourselves, and misunderstand human nature, and to be at a loss when confronted
with evil. A number of years back, some ordinary and shiftless young idiots in Cape Breton, Nova Scotia heard a rumour that the local McD’s fast-food outlet kept loads of money in the safe (not true). They planned a heist, and took along some nasty weapons. Three restaurant-workers were brutally killed, another young woman was crippled for life, and their own lives ruined, since they were easily caught and soon confessed. Many of the people of the region just couldn’t understand. How could their own local kids go ahead and do something so senseless and deeply evil? Well, because all people are moral agents, and capable of anything, even acts of monstrous evil like the McDonald’s Massacre. As Jesus says, it’s out of the hearts of men that evil comes. So shame on Sesame Street– liberal good intentions."

Posted by Lady Cincinnatus at 8:10 AM

I love all sorts of fictional monsters, so when I saw the title of this blog post, I just had to stop by and see it.

The thing is, I like scary monsters. Like the Gashadokuro of Japan, which will grab you and bite your head off if you don't run away from it. And some monsters are supposed to be nice, like the English/Scandinavian church grim, which is a guardian of churches.

Well, I'm not sure how much sense I made, but that's my thoughts on the matter, anyway.