Is Harry Potter Sending Us a Hidden Message? 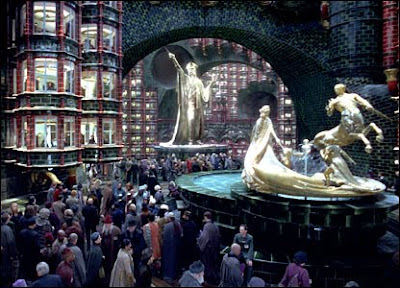 I stumbled upon this article yesterday and it confirmed something I've ofter wondered about after reading the Harry Potter books and reading a brief bio about J.K. Rowlings. Rowlings spent some time in Portugal and working for Amnesty International. I had to wonder if she saw, early on, the spread of Islam to England and worked it into her later books. The simularities, as are spelled out in the article linked above, are really too uncanny.
While there is no indication that her ex-husband was Muslim, he certainly was ex-Army and abusive. Since 99.9% of the military action today involves radical Islam, it seems she would have had opportunity enough to at least be familiar with the threat. Upon her return to England, seeing it play out in her own country and the U.S. in 2001.
"The Ministry, in short, is in denial about the threat from Voldemort. It’s also in denial about the extent of the infiltration of the Ministry by Voldemort’s agents."
Posted by Lady Cincinnatus at 5:31 AM