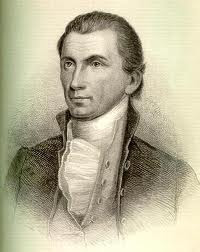 What inner-city kids in Oklahoma are learning about President James Monroe, America's fifth president and last to be considered a founding father,

“White men getting richer than Enron./ They stepping on Indians, women and blacks./ Era of Good Feeling doesn’t come with the facts.”

What they should really be learning,
President James Monroe fought in the American Revolution. He served in the Continental Congress as an anti-Federalist delegate to the Virginia convention in consideration of the U.S. Constitution. Monroe opposed ratification on the grounds that it gave too much power to the federal government. Monroe studied law under Thomas Jefferson. He is best known for the Monroe Doctrine of 1823 that stated the United States would not tolerate further European involvement in the Americas.
Posted by Lady Cincinnatus at 6:00 AM

If kids are getting taught that garbage in middle America now, what hope does the Republic have?

Not only do they get incorrect revisionist history, they are taught ebonics at the same time, looks like a win-win for everyone.