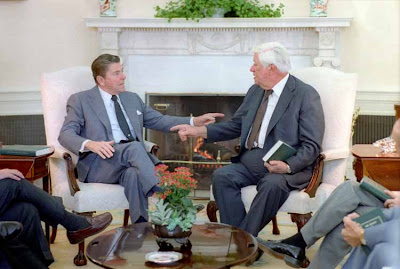 First, I agree that we are completely being played. We've never had any chance at this...Boehner thought he could play Henry Clay and become known as the great compromiser. Understandable when you consider his formative political years where watching Tip O'Neill and Reagan and trying to replay their model for breaking partisan gridlock. Problem is, I don't think Tip O'Neill...while certainly a Democrat with a capital "D"... was ever an anti-American Socialist Marxist agitator.

Cut, Cap & Balance was passed and tabled as soon as it got to the Senate.

And likewise, ANYTHING that comes out of the Republican controlled house is D.O.A.

What shocks me is why the Tea Party doesn't understand that. Anything that Boehner and the Republican-held House does is D.O.A. Anything. Period. So both sides are making a huge mistake. Boehner thinks he can deal with a bunch of reasonable Democrats. He's wrong. And the Tea Party thinks it has any influence in what actually happens in this debt ceiling debate--the President and the Dem controlled Senate will eventually do exactly what they want to do. Obamacare Episode II.

If anything, I think our side shouldn't even be uttering the word Boehner or plan. We should be doubling down our messaging--Repeat over and over that the Dems will do whatever they want because they hold 2 branches of government. Repeat all the bad things that will happen as a result of their spending spree. Repeat how important it will be in 2012 to make sure the Dems DO NOT get 2 branches of government ever again because we see what they do with that spending power. Then take back congress and pass cut, cap and balance. Democrate Power = You Are Poorer. I mean how hard is it to come up with a slogan like that and then repeat ad nauseum like the Dems do?

But instead, we attack Boehner, split our team right down the middle, and the Left will do exactly what they would have down all along--Never let a crisis go to waste and probably allow Obama to invoke the 14th Amendment for yet another stunning executive power grab. And then what? The tea party can say how right they were about Boehner not being 100% pure in principle. Boy, that's going to feel like a win for the Tea Party.
Posted by Lady Cincinnatus at 9:21 AM

I kinda-sorta linked to you on this...hope you don't mind.

Yeah. The House should have just re-passed Cut, cap, and balance and have thrown in a few more cuts.