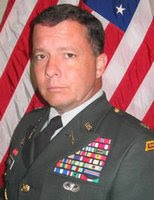 First, the really great news of the day you won't be hearing on any mainstream media channel. From blogger extraordinaire, Proof. The end may be nigh for We-Lost-The-War-In-Iraq Jack Murtha. As Proof so eloquently puts it,

"Hmm! Tough choice for all the bitter, clinging voters in Pennsylvania!"

The 18-term congressman's challenger, staunch conservative Republican newcomer William Russell, raised nearly $670,000 in the second fundraising quarter. Earmark king Murtha scraped together a measly $119,000. Russell's underdog campaign bested Murtha without the perks of incumbency, national name recognition, big PAC donations or mainstream media support.Even more amazing: The 45-year-old Russell, a Desert Storm veteran, former Army lieutenant colonel and Army reservist who survived the Sept. 11 terrorist attack on the Pentagon, was not even publicly campaigning during the quarter. He is on active duty with the Army until after Aug. 1 and is barred from actively campaigning until then.

Now for the bad news coming from across the pond. While Lionheart's commentary at times can be on the religious side and we all know how uncomfortable that makes us, Brittish blogger friend and 21st centurty templar knight, who we all should know, do not deserve the treatment they've recieved from history is going "off line" while he awaits conviction by Britain's PC police for hateful writing on his blog. Funny how Britain has all this time to go after bloggers and arrest a father trying to protect his home. Coming to a country near you folks. This is NOT good news.
Posted by Lady Cincinnatus at 6:14 AM