My Sobering (for what it's worth) Election Analysis 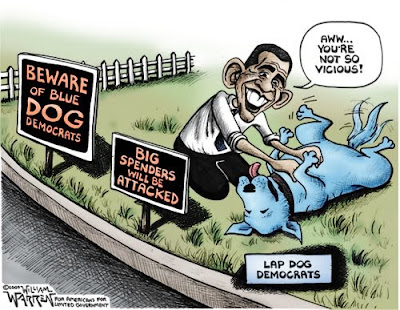 I think of all the races, the PA-12 race portents things to come in November.

My feeling and analysis is that Republican's won't win by as much as we hope and will see fewer seats taken than in 1994. And I point to Republican Tim Burns loss in PA-12 by a surprisingly large margin -- by the time he conceded, he was down by 10 points.

I do feel that the overall tone of the 2010 campaign is heavily against the "go along to get along" Republicans like McCain and even Trey Grayson in Kentucky, but what worries me is that Pennsylvania's Tim Burns was a first-time Republican candidate and businessman. The ultimate "outsider".

My thought was that Pennsylvania was and is still enough of a blue-dog state that the "outsider" stance alone was enough to bring over some of the traditionally blue dog Dem vote to the Republican side. But that wasn't the case. If the actions and effects of an Obama/Reid/Pelosi government monopoly are not enough to win over those blue dogs in PA-12, then they must not be there. Which begs the question...how many blue dogs are even left or have they all been seduced to the Marxist, progressive wing of the party.

It also makes me think that the Dem GOTV machine is far stronger than the Republicans are prepared for. Not a good sign heading into November. I know Murtha's district has always been solidly Democratic but wasn't that the whole point?

The Kentucky race, I believe, is equally sobering. I know many are thrilled with the Rand Paul election, but I'm not convinced he can win against Jack Conway (the Dem) in November. I think Conway is more politically experienced, will have the full brunt force of the Democratic GOTV machine behind him, has a better political "image" and will hammer Rand on his strong libertarian positions, especially when it comes to issues effecting senior and swing voters in Kentucky.

I hope I'm wrong. And if nothing else, I hope the "Tea Party" and Republican efforts can come together, ratchet up their efforts and prove that my sober analysis is way off base.
Posted by Lady Cincinnatus at 5:21 AM

Burns may have suffered from the large Dem turnout to defeat Spector.
He'll get another shot in November.